On the way to the mountains... the funniest thing happened... 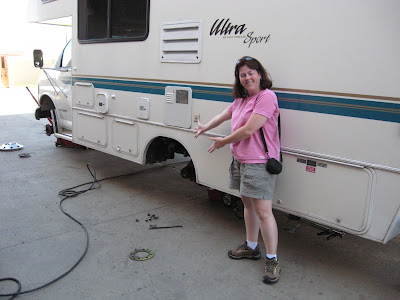 Well I am finally on my way to Colorado on our long awaited vacation. It’s been a bumpy ride… and I mean that literally! We had intended to pull our jeep behind our Class C RV, but up until late afternoon on Thursday, we gave up… After taking the jeep apart to fix a non-functioning horn, we finally got it put back together only to discover now the jeep would not start. I think it was either a bad omen or a stuck of good luck that we did not take the jeep.

Somewhere along the way, in Brownwood I think, we stopped at the Walmart to get a few things we forgot in Austin. Cris checked out the RV and discovered our black water tank (the poopoo tank) had a leak in it. OH GREAT! What else can go wrong! So we attempted to patch it up as best we could, but knew we would not be able to use the toilet until we got it fixed.

So we got a late start Thursday and made it to Abilene late Thursday night. We had wanted to get to Lubbock, but since it was already 10:30 pm, we decided to look for the KOA. KOAs (Kampgrounds of America) are famously known in the RV community for having high quality campgrounds with great clean facilities. They are also known to be a little more expensive. Since we were still in texas.. and definitely needed hookups for the AC that’s where we stayed. I tell ya though… I was not the nicest KOA I have ever been in. The bathrooms were run down and the wireless internet access they advertise is nothing to speak of. I for one, would not recommend anyone going to that KOA.

Anyway, we decided to get an early start the next day to see if we could find a RV service place so we could get someone to either repair our poopoo tank or to tell us what we needed to do with it. Stopped at someplace called Jerry’s RV. The service manager was a JERK! He was very short with us and said there is no way to fix our problem… that we would need to replace it. When asked if he could take a look at it and see if there was anything we could do…. NO. Ya know when you speak to someone who doesn’t even look you in the eye… that’s the kind of disrespect this guy was giving us.

So we went down the road to Gene’s RV where we were treated a lot better although they didn’t have much better news to tell us. The service tech took a look at it… and said the best we could do is dry it out as best we could and put some epoxy on it. It might hold for a few days…. Then he let us dump our tank there… we had very little in it but needed to dump it so we could air dry it. Not that we needed anything, but we purchased something in their store as our way of saying thanks.

Then we headed toward Lubbock and then on to Amarillo. Just outside Amarillo, I was driving when all of the sudden we had a blowout. And let me tell you when you have a blowout on an RV it is no small thing. First of all we blew out at the worst possible place… on an overpass on the interstate. We kept hearing a metal scraping and we thought we were hitting rim so we pulled over as far as we could. Cris called 911 to get some help to block off traffic so no one runs into us. I called our Good Sams Roadside assistance. Soon the sheriff arrived and informed us we still had one good tire on our back dualy so we should try to drive it further up the road to get over safely. We did and it was excruciating because of the metal scapping we were hearing.

Roadside assistance came and changed the tire. It is impossible to change a tire on an RV without some kind of hydrolic jack because of the weight of the rig, so we think the Good Sam’s roadside assistance is well worth the trouble. In the course of changing the tire, we discovered that the tread coming off the bad inside tire damaged the metal frame under the RV. It appeared to be stability frame for the RV not the chassis of the truck park. But it was obvious that it was not the only thing that was damaged. So we went to the nearest RV Service (oh no here we go again) to get some advice on if the RV was safe enough to drive.

They were really nice there… although I don’t know if they were nice because they are just nice… or it was because the sheriff called them to let them know we were coming. But in any case they were nice. Unfortunately they had even worse news for us. The tire damage cause damage to the propane lines to the hot water heater and the refrigerator. Now at this point I was ready to throw in the towel and just go home. I felt like we were jinxed. Cris on the other hand felt relieved. Apparently Cris had bad vibes the whole time and didn’t say anything and now that the tire went and we had all this damage… now she felt the worse was behind us. Weird huh?!

We then went to Walmart to get some ice chest to possibily save all the food we had in the refrigerator. Then we went to discount tire to get the bad tire replaced and check out the other tires. Our warrenty covered the replacement of the bad tire at no charge and we were able to get 5 more new tires just by buying new warranties on them. New set of tires on an RV usually costs around $600-$900, but we were able to leave discount tires with 6 new tires at $125.

We decided at that point to keep on going to Colorado. We had been looking forward to this trip for a long time and had cancelled plans to visit our friends in Colorado a few years back due to me falling ill at the last minute. So now we had to deal with the fact we still have not been able to fix the leak in the poopoo tank. So off to Academy to buy a port-a-poty.

Now the idea of being in the RV with no propane is not the best… which means no refrigerator, no hot water, no propane to cook….. its like tent camping… only more expensive! So here we are… still heading to the mountains… my favorite place to be.

If you want to keep up with my trip, click on the RSS icon to the right and subscribe. It will send you an email alert when my next blog entry comes out. Take care!
Posted by blmahon at 10:41 PM

Gosh Brandi..... I think I would have gave up already! But maybe that is the trip. The trip of adventure through the irony of conditions ...when you get done with this trip you will have your RV ready for the REAL VACATION.


Have a wonderful day!
Teresa